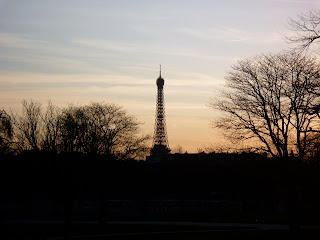 Paris April 2010
In the Parisian Metro, trains have their walls decorated by poems. This carriage has French poet Paul Verlaine’s verses about finding a woman that he loves and who would love him as well.  Springtime in Paris means sunny afternoons, gardens packed with couples, and families but also means it’s the Spring of Poets.
To discover literature and poetry in Paris and stay in tune with this event organised by the ministry of culture celebrating poetry, Le Musee de la Vie Romantique also known as Hotel Scheffer Renan (16 Rue Chaptal-Metro Saint Georges) has a gallery dedicated to French writer George Sand where her belongings and paintings are exposed. Surrounded by leafy streets, the mansion’s entrance is decorated with little trees and flowers leading to a charming garden where, a grandmother and her granddaughter are reading the newspaper on one of the benches. 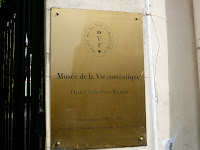 Le Musee de le Vie Romantique is dedicated to the arts and literature of the romantic movement of the 19th century, it is located in the 9th arrondissement in what is called the New Athens an area that used to be inhabited by artists, explains conservator Marie- Claude Sabouret.
With Frederic Chopin’s melodies playing in the background, an important guest of the hotel, the house has a “writer’s circle” room on the ground floor with a sculpture of Sand’s bust and romantic portraits on the first floor. “The painter Sheffer used to have guests of the literary Paris of the period here.  They all lived in the area and would have debates about literature and politics, which is why the museum and the new Athens were important in those times,” says Sabouret.
After the visit through the museum and the courtyard, a few streets away is Rue Notre Dame de Lorette where Hotel Albion is. The two stars hotel set within typical French apartments has a central location where Boulevard Haussmann and the Opera are only a short walking distance away. The hotel is small but cosy and serves the purpose of sleeping in a clean comfortable room.
A walk through Boulevard Haussmann along the luxurious Printemps and Galeries Lafayette department stores leads to Place de l’Opera and the Opera Garnier where Place de la Concorde and the Musee du Louvre are also nearby. The whole downtown area of Paris can be easily walked in 30 minutes while passing through these iconic monuments without taking the metro. 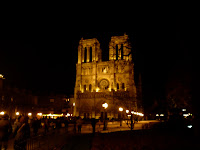 The Road to Victor Hugo's Notre Dame de Paris
Standing in front of the Obelisque, the walk to the Louvre through the leafy Jardin des Tuileries is more enjoyable than in the busy streets and crossings until the glass pyramid entrance of the museum.  After walking through rue Rivoli and Chatelet, the Seine is finally showing with the afternoon’s reflections of the sun.
Notre Dame de Paris Cathedral is standing on l’Ile de la Cite a footbridge away carrying all its history and its iconic figure from Victor Hugo’s book The Hunchback of Notre Dame revolving around the cathedral that led to its renovation in the 17th century. While standing on the “Parvis” of Notre Dame and contemplating it, the legendary French writer and poet’s words about Paris are echoing, “He who sees Paris thinks he sees the bottom of all history with heaven and constellations in the intervals”.
A few minutes away from Notre Dame passing through the Flower market of the island and the footbridge, is Ile Saint Louis, a smaller island on the Seine. On the corner of the Quai d’Orleans is “Le Flore en Ile” café with an ice cream stand of the famous French Berthillon house of sorbets and ice cream packed with masses of people impatiently waiting to get their share of flavours before they all vanish like the vanilla, chocolate and strawberry. 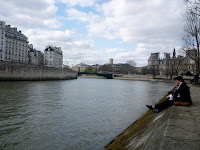 With their cones in hands of either Chocolat Blanc or Cassis the few flavours remaining, people walk down the stairs of the bridge to sit along the bank to enjoy a close-up of the river. A woman facing the river is painting the portrait of springtime in Paris on this side of the bank were people are silently watching the flow of the Seine while eating their ice cream a couple of hours before sunset.
When the night starts to fall, the bank empties little by little from people who are heading back home for dinnertime. A metro ride from “Cite” to “Alma Marceau” metro station, reaches Chez Francis, a restaurant set on the corner of the Pont de l’Alma, with a direct view of the lit Tour Eiffel.
Food, Tour Eiffel and Croissants
The menu is simple and traditionally French with a starter for cheese lovers like the “Soupe Gratinee a L’Oignon” a salty but sweet Onion soup covered by a bed of melted Gruyere cheese and bread croutons.  While waiting for the main dishes, with the window view of the Tour Eiffel lighting up every hour, a couple sitting on the table beside who went for the Royal Seafood platter are slurping their mountain of Oysters, Gambas and all kinds of crustaceous with an embarrassed laugh.
The very typical French “Steak-Frites” arrives on the table with its juicy meat and chips glowing from the plate accompanied by a soft buttery Béarnaise sauce made of herbs. For dessert, sweet crunchy caramelized custard Crème Brûlée seals the deal for the night.
Early morning is a good time to experience the traditional Parisian Breakfast along with literature in Café de Flore  in Boulevard Saint Germain,(Metro Saint Germain des Prés) in Saint Germain des Prés in the 6th arrondissement home to the existentialist literary movement  of writers such as Jean Paul Sartre and Simone de Beauvoir who were a known clientele of this café.
Every year, Café de Flore hosts a ceremony for the Flore literary prize and displays in its windows the last winning book. With a menu looking like a book that has a quote from Sartre, the smell of fresh coffee and crisp buttery croissant reaches the nostrils from the bar of the place.  After a café au lait, the French version of coffee with milk, a crispy buttery croissant and a tartine-confiture, which is a slice of toast bread accompanied with jam, anyone could melt into the setting of this intellectual slightly arrogant place that is typically French. 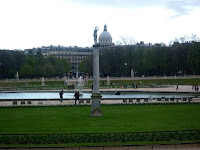 When the café starts to get busy, to get more into the literary setting of Saint Germain, a few minutes away from the Boulevard is the Palais and Jardins du Luxembourgwhere the Senat, one of the branches of the French parliament is located.  In one of the lakes of this 23 -hectares garden, some ducks are finishing off a session of what seems to be them taking a bath next to one of the famous statues of the garden of French writers such as George Sand, Gustave Flaubert, and Stendhal but also artists such as Frederic Chopin and Ludwig Beethoven that are spread across the charming pathways with pine trees and weeping willow trees.
Maison Victor Hugo
A heart to heart experience with literature and history is a few metro stations away in Bastille where La Maison Victor Hugo is located in Place des Vosges in the Marais district. Hugo lived in this townhouse for 16 years that has been now turned into a museum. 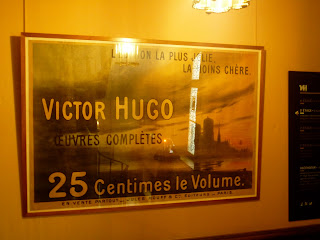 The visit to the house is set across three periods of the writer before, during and after his exile that was due to his political views and writings. In the rooms of the house, writings and portraits tell the story of the writer of Les Miserables with his affection for his daughter Leopoldine who died at the age of 19.
After a trip back in history, an afternoon walk down the trendy Marais district sets the time again, with lovely boutiques and bistros across the streets like Les Philosophes café, “the philosophers” ( Rue Vieille du Temple) literary Paris will always be found in the streets even in the café’s names.

Photos by Randa El Tahawy
http://randaletahawy.net
Posted by In Randa's Words at Sunday, May 02, 2010

Must say... I love Paris. There's no place that I love more than the Jardins du Luxembourg. Every time I sit in that place, I must seem like a crazy person. I do nothing... I just sit there and grin. It makes me SO happy to be there.

Now, you've given me much more to think about when I'm in the lovely city though, Randa. Thanks lady!