A new reality TV show will launch on January 8 on Dubai TV called Al Mujaddidun. The show was created by Amr Khaled a famous Egyptian preacher and is said to be inspired by the Apprentice, the American TV show.

Amr Khaled, has gained enormous popularity in the world of Islamic preaching and was ranked in 2007 the 13th most influential people in the world in the Time magazine.
Why is this Egyptian scholar often referred to as preaching rock-star so different from the others?
There are a lot of reasons:

Due to his growing popularity and often controversy about his way of preaching he was removed from Egypt.

At that time, some used say to that he was told to leave Cairo because he had too much of a religious impact on the society which was too influential for the government .

Also, some rumors used to say that the women from the President's family wanted to get veiled because of him.

At that time, it was a very normal social phenomenon to see women getting veiled after listening to Amr Khaled's preaching.


It seems like he had put the whole country in a higher level of religious fervency. Young and old people would always swear by his shows, his cassettes and website.


But his ban only helped him gain more popularity and he was broadcasted by many satellite channels.

It could be true that Amr Khaled's approach very much differs from the traditional Al Azhar style of preaching.

This is the key to his success, he is the modern preacher who knows how to talk to the youth and focuses on Islamic behavior rather than actions .

In a recent article by the BBC  a girl was quoted saying "he speaks our language" referring to Khaled and why he has so much impact on the youth.

In fact, his show is all about the community and how to make the 16 contestants who come from various Arab countries active.


"The aim of it is not to make money, but to make the youth ready to support the society," he told the BBC.

With his modern take on religion and society how can Amr Khaled not be one of the most influential people in the world?

"Not In our name" seeks to stop war 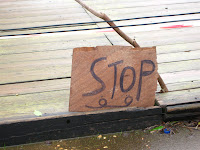 From Northern Ireland, to Lebanon “Not in Our name” transcends all the political borders giving an account of how nine men were able to fight for a country across their continent.

The poignant movie premiered on the 30th of November in London by Renegade Films, succeeds in sending a wide political message to the audience about civil action.

Featuring interviews from Tony Benn, president of Stop the War Coalition and political activist and actor Mark Steel "Not in Our name"depicts the story of how a group of men were determined to take actions and stop the war crimes in the Middle East.

No to Raytheon in Derry

Raytheon Company , a major American defense contractor, known to be one of the largest producers of arms and guided missiles opened its office in Springtown, Derry in 1999 and has been widely opposed since.

The film shows police footage of how the nine men stormed into the plant throwing computers and papers away from the windows of the building, hanging signs such as “Raytheon has been now Decommissioned”.

The men's message was to take a stand against the company that was believed to have a practical impact on the civilian casualties and atrocities happening at the same time in Lebanon.

The Raytheon 9 say in fact, that a Raytheon Guided Bomb Unit was used in the Israeli air strike on July 30, 2006 against the South Lebanese village, Qana.

Motivated by their fight against war, the nine men visited the village of Qana. The film shows a moving and a life changing experience to the audience.

The Raytheon 9 were arrested for 36 hours and put on trial charged of unlawful assembly and aggravated burglary but were later released.